Author: Lidia Mahillon, FLF Student. This Op-Ed was submitted as fulfilment of the module on Food Governance for the Master of Research in Food, Law and Finance of the IUC.

There have been numerous debates in Belgium about the ‘secular ethics’ – morale laïque – and religion courses in elementary and secondary school. As in other European countries, the idea of a “citizenship course” has been repeatedly suggested. The ability to choose a class based on your religious beliefs is based on the principle of freedom of religion. However, it can have adverse consequences in terms of group cohesion – in some ‘unofficial’ cases, it also leads to assembling pupils into classes based on their religion, ghettoising the groups. By separating class hours according to confessions, the system highlights differences without creating bridges between the groups: instead of learning from one another, children are kept separated. Those were the considerations that led to the introduction of a citizenship course in Belgian schools, which aims at providing for a common course on what are considered “core” citizenship values. 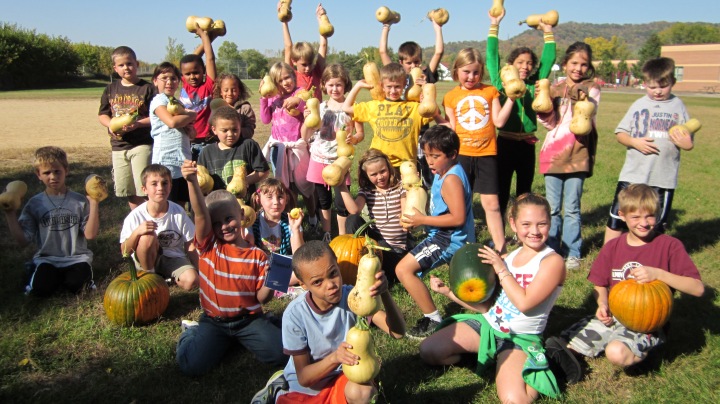 The idea I propose would be to depart from the assumption that children need to become good citizens – i.e., that they should be able to integrate a predefined set of values and ways of being as defined by the government, centred around the polis and a conceptual notion of community (that of the nation-state) – and rather move towards the idea that children should reconnect with what it means to inhabit the earth instead of the city; what it means to share a common space – the planet, air, water, nature – and how to become self-aware while respecting one another’s differences. I believe that such an outcome could be achieved by enshrining an agroecological food growing course in the official education programme, because it encompasses all aspects of how humans relate to food and to human society, pre- and post- harvest.

Why schools? Why children and young adults?

The impact that children can have on their household food habits has already been demonstrated by several studies and pilot projects. Focusing on schools would thus be a very nice way of putting into use the existing school system infrastructure while benefitting from a very ‘efficient’ ripple effect on broader layers of the population.

The school system provides the means to implement such a reform in a relatively easy way. First, the government already decided to allocate one hour per week to citizenship education. Second, as for the infrastructure, going to school is already mandatory, and children have no discretion in whether or not to attend the classes. That would make the ‘investment’ certain to reach the public it was thought for. It is a structural advantage compared to a voluntary-based adult-focused project, for which there are no certainties that the project would catch up. There would be no setting of a whole programme only to find out that there is little interest in it in the population.

Moreover, education programmes and the Ministry of Education provide for a good existing network of implementation. That structural leverage would be convenient to use. Not only would the national network of schools allow for fast change, but each school in itself also constitutes a small network of people: the pupils, the teachers and the staff, but also the parents and, not to be dismissed, the neighbourhood.

Schools are indeed located within ‘localised’ communities, which too often lack of social ties. Having a communal space where food is grown would create an enjoyable forum to open up the project to parents, as well as youngsters and older generations. An option could be to create specific workshops when heavy duty is needed – youngsters could be involved – or where some traditional knowledge is transmitted – older generations could help save seeds, and exchange recipes and preserving techniques.

There exists an almost endless list of justifications as to why implementing a gardening programme in school. It gets people moving and staying outside in the open air – a major concern with respect of our current way of life. It constitutes a good way of raising interest about sciences: seasons, biology, construction (irrigation, grading and landscaping), chemistry, physics, mathematics; all the “hard” science fields can be applied to the garden, since they were first aimed at studying nature. All these subjects are already registered in the national education programme, the only difference is that they would be taken outside of the classroom and experimented first-hand. It also constitutes an answer to concerns on how to get student to connect with what is often perceived as a ‘too abstract’ curriculum.

Gardening together on the same plot of land also fosters reflexion on human issuess such as how to divide work, how to share the produce of a harvest, how to work as a team, and so on. The agroecological approach of the project would teach children the importance of biodiversity, and thus diversity at large – which would tackle the very important problem of bullying in schools. It teaches all of us the importance of team work and complementarity, acceptance, resilience and working with what is given to us. It also raises awareness on concepts such as circular economy, consequences of our actions, relationship to the earth and the animals. Agroecology would also have a tremendous empowering effect: relying on very little but what is already available, children could realise that people can have agency in their life as long as they know their surroundings.

The food grown in the school garden would of course not be sufficient to feed the whole school. However, getting the pupils to engage with where the food comes from and acknowledging the ‘natural’ origin of food has known benefits of sensitising and increasing awareness about healthy and sustainable eating. Once people know where organic food comes from and what it looks like, they are more susceptible to make conscious choices when they buy their groceries. As for what concerns the food consumed in school, a matching public procurement plan focusing on locally sourced and sustainably produced organic food would be the best option. It would reinforce the community-creating effect of the gardening project, as well as creating more jobs in the school kitchens. This kind of job might also be very well suited to social insertion programmes such as those provide by the Belgian system of ‘right to social integration’ and the article 60 of the Loi sur les Centre Publics d’Action Sociale.

The step forward would be to consult with existing projects throughout the world – such as London’s Food Growing School, School Food plans, Gardeneers, Appetite for Change, food growing schools in impoverished neighbourhoods of the USA, … – which range from highly advanced stages of ‘farm integration’ into schools to only a few raised beds in the school yards. Each could be adapted to the urban/rural surroundings of the schools and to the space available. Then, the existing “environmental and sustainable development education” programme of the Belgian Ministry of Education, which already foresees that part of the “citizenship course” will address environmental issues, could provide for a good starting point to be extended to represent the full content of the class.

Finally, education is a public good. As such, it constitutes one of the best fora to address food. Indeed, a rising tide considers food to be a public good too, deserving to be managed in a way similar to that of health, education or roads. It would thus seem ‘natural’, if one can say, to use a public good in order to foster another one.